Now that I have shared my findings regarding Solomon Goss’es will, I would like to share about my search for the final resting place of Solomon, Olive and David and Solomon Goss Jr’s two babies, while visiting the area of Marietta in September 2011.

Sadly, I was not successful in locating their graves.  I did give it a very good try.  Finding them with their stones would answer a lot of questions.  Here is what I did.

1.  I personally visited as many cemeteries as I could during the time I had. I noted their establishment dates like Rainbow, Harmar, Mound, Oak Grove, Berg, Rockland, and Waterford. Mound and Oak Grove are in the town of Marietta and they have monuments to the early pioneers. They also have DAR and SAR memorial plaques and flags:

1. Marietta and Washington County – A Dream Come True!, dated Sept. 13, 2011.  This post featured a little about Mound and Oak Grove and mentions my visits to Rainbow, Watertown, Rockland and Harmar.

I will present more of my photographs from my cemetery tour of Washington County in the next posts:  Mound, Oak Grove, Harmar, Berg, and Watertown.

2.  I studied as many of the published cemetery books for Washington County, Ohio, targeting the Marietta area and the Fearing Township area. The farther back a cemetery was recorded the better.  Some of these publications  are with the Family History Library in Salt Lake City.  I made an Excel spreadsheet as I studied the FHL records to keep track of my progress.  You will find that here in the form of a PDF:  SolomonGossCemSearch.  Some involved searching the newsletters of the genealogical and historical society for publications of the cemeteries in Washington County.  These publications cover established cemeteries not private ones.  I did not have time.

The Tallow Light is featured in the PDF – SolomonGossCemSearch.  It is the main publication of the Washington County Historical Society.

3. On my visit to Marietta, I visited the Washington County Public Library Genealogical and Historical Annex and searched their records, publications, maps and articles including the Jerry Devol collection. Mr. Devol has passed but he did leave his genealogical research which includes a lot of his cemetery research.  The volunteer at the annex, Lila Hill, is very knowledgeable and helpful and a member of the Washington Co. Chapter of the Ohio Genealogical Society.  Here is their website:  http://www.washogs.org/index.html

4.  I worked with Jean Yost, President of the Sons of the American Revolution Marietta Chapter who was very helpful.  They had a listing on their website of soldiers of the American Revolution from the area and Solomon Goss was included under their “Spirit of ’76 Patriots.”  http://mariettasar.com/spirit76.htm  Of course, there is more information and names at their website and it is definitely worth studying.

5. Mr. Yost gave me the name of the current owner of Solomon’s land in Fearing Twp. We both personally visited the land and met the owner. I do not publish the owners name out of respect for his privacy but I am willing to share if you contact me or leave a comment.

The current owner of Solomon Goss’es land told me he had never found nor located any burials on his property.  I took his word.  He further stated that he had lived there all his life and his parents had been there for a good 80 years.  He mentioned that there were other burials sites on farms near him. The area is very hilly and the roads are gravel.  They are very rough, very steep and have deep ruts.  My husband was brave in our rental car and drove up a steep hill with huge ruts to the Berg Cemetery which is on top of a big hill.  We did venture up to one area east of Solomon’s land which placed us on a ridge.  Again we climbed steep hills with gravel roads to get there.  My husband knocked on a door but no one was home. The farm was filled with lots of equipment, buildings, houses, junk and overgrown grass.  It was not a good idea to explore their land because we did not have permission and that would be trespassing.  So we decided to back off.  Much to my sadness, I was told that some of the farmers had plowed over burials.

6.  I studied online versions of cemetery lists for Washington County.

a.  Find A Grave is a good place to start.  They have Rainbow, Berg, Watertown, Harmar, Mound, Oak Grove, Oak Grove, Rockland and many more. I did not visit the Stanleyville Cemetery in Fearing Township but you will find it on Find A Grave. Caution:  Online listings are not always complete so check a publication as well or search out other alternatives.

b. The Washington County Cemetery Index was very helpful:  http://wchs-ohio.org/cem_index.htm  It gives a listing of the cemeteries and townships they are in and it also has a surname index.  There are no Goss listings.

c. Cemeteries in Fearing Twp are:

In evaluating these cemeteries in my search I had to consider the religious affiliation (Protestant, Catholic, German etc.) as well.  See my  SolomonGossCemSearch PDF listed in #2 above for more detail.

The Washington Co. Public Library Annex has Cemetery readings for all except Gerkin, Cherry, and Miller.

7.  I called several historical societies like the one in Belpre for the Rockland Cemetery to find out where the grave of Daniel Goss was located and was informed they were updating their cemetery book.  I tried the Marietta Cemetery department but struck out.

8.  I was told by the President of the Washington County Historical Society that Marietta used to be a big shipping port and the ships would come in and the disease they brought would race up the Muskingum River valley wiping out many people.  They would bury people quickly and fast back in those days.  Did Olive and David get caught in one of these epidemics?

9.  There were floods on the Ohio and Muskingum River that destroyed graves.  Harmar Cemetery suffered greatly which is one of the oldest.

Solomon died in 1825.  Olive his wife and David his son probably died earlier before 1810 so those events took place 187 years ago.  See my previous post regarding Solomon’s will and my conclusions about the deaths of Olive and David.  I have seen how quickly a cemetery can be overcome with fallen and broken stones and the elements.

10.  The town government did not keep records of the cemeteries in the early years and many were moved as progress came.

The book “Mound Cemetery, Marietta, Ohio” by Owen Hawley is an excellent book published in 1996 by the Washington County Historical Society.  This book gives the history of the cemeteries in Marietta. I will share some of it in the post on the Mound Cemetery in following posts.

11.  The area around Rainbow was once a thriving community and it is possible that Solomon, Olive and David and Solomon Goss Jr’s two babies are buried in that area of Washington County, north and west of Marietta and west of Fearing Twp.  I personally visited Rainbow Cemetery.   I have posted about that cemetery.  See number #1 above for the link to the post I wrote on Rainbow.

12.  I have researched Solomon and Olive’s children trying to see if any information would shed light on the burial of their parents.  I have asked of descendants and cousins if they have any ideas or knowledge of the burials.

13.  Early vital records in Washington County were consulted.  Marriage is more widely published and death is very difficult to find before about 1867.

14.  I consulted the newspaper clipping files of the Washington County Historical Society and all I found was the estate notice that I have published in several posts in this blog regarding the Solomon Goss estate.  Here is a listing of Marietta newspapers I found in a Tallow Light publication.  As you read this list you see that there is a gap of missing issues right in the 1825 time period when Solomon died. 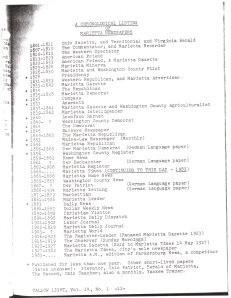 Marietta Newspapers and the years.

15.  I tried to find Obadiah Scott Jr’s resting place. He was Olive Scott Goss’es brother.  He is said to have been buried in the Waterford Cemetery/Round Bottom.  So we visited that cemetery but did not find any tombstone showing his burial. A Tallow Light publication did list him in the Waterford Landing Cemetery (Waterford Cemetery) on pg. 48 third from the bottom “Scott, Obadiah died 30 Nov. 1827 in 57th y.”

In summary, I was traveling in an unfamiliar area with little time, so I had to target specific cemeteries and records.  I  feel that if the descendants of Solomon and Olive were to do more searching, it would require cultivating friendly connections to seek out further possibilities.  I did meet a lot of people while visiting Marietta and hopefully these contacts will remember me and something might turn up.

So Solomon, Olive, David and the two babies of Solomon Goss Jr. remain missing and I continue to dig into other records to learn about more them.