John A. Spracklin, son of John and Lydia Spracklin, did not have a will. This means that his estate went into probate and the process took from July 1863 to January 1866, about 2.5 years.

Here is a summary of the probate process that is written in the large journal books that the clerk maintains.

2. Appointment of the Administrator W. McClelland, July 18, 1863, Vol. B, pg. 728, FHL#2130104.  W. McClelland was appointed, bond set at $1400 and Joseph M. Byers, John Eichelberger, and Joseph S. Davis were appointed appraisers and were to appraise both the personal and real estate property of the deceased.

Appointment of Administrator Jrl B, pg. 728

4.  Additional information (column heading of index). Petition to Sell Land  August 22, 1863, Vol. B, pg. 743, FHL#2130104.  McClelland petitions to sell land, Drusilla does not claim her 1/3 dower preferring money for the support of her children, and it is ordered that the land be sold.

Court of Probate August 22, AD 1863 On motion to the Court by William McClelland atty for the Petitioner, and it appearing from the proof addressed that due notice of the _____of this proceeding, has been given to the defendants heirs of the said John A. Spracklin and that the widow acknowledges accurate and it also appearing by order of the Court, an appraisement of the premises disclosed in the petition was made by the appraisers of the Personal estate of the said John A. Spracklin and reposted in the Inventory &c and it also appearing from the answer of the defendant Drusilla E. Spracklin, the widow of the said deceased that she has relinquished her right to have downer assigned to her by metes & bounds, if any such she had, and ____to have the same set off to her in money, out of the proceeds thereof. It is therefore ordered that the said Petitioner proceed according to law to advertise & sell the interest of the said John A. Spracklin held in said Real Estate, at the door of the Court House, at not less than two thirds of such appraised value upon the following terms, to wit. One third in hand, one third in one, and the balance in two years from the day of sale, and he made report of his proceeding without unnecessary delay.

5. Inventory Vol. J pg. 201 and 202 – FHL#1294319, August [3 or 7], 1863. Appraising of the personal real property, description of the properties in Knox Co., affidavit of the appraisers saying this is true and just and McClelland confirming the inventory and appraising of it and an explanation of not knowing about the land the deceased held in Illinois. The comments in the following transcriptions are made by a hired researcher years ago by my cousin.  To view these typed transcriptions just click on the picture and it will open.  Don’t forget to click your back button to return. 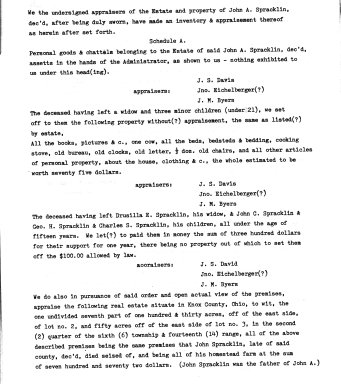 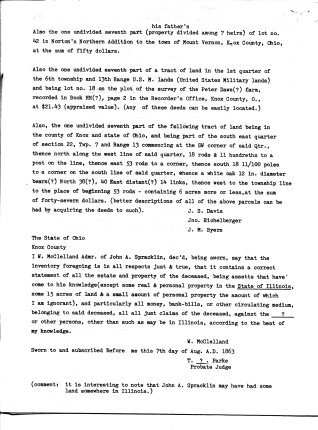 9. Admin Serv. and Costs Vol. C pg. 299. – Common Pleas could not find. This is probably in the court records and not in probate records.

You will notice that the dates go all the way into early 1866, which means it was almost two and half years before the estate was settled.

John A. Spracklin’s Probate Packet or file where the original documents are kept is summarized below. The clerk of the court took the documents and recorded them in the big court books above.  Mr. McClelland scrawled most of it.  So these copies are very difficult to read and because of the better journal copies I have emphasized the findings in them. The following packets can be viewed online at Family Search. 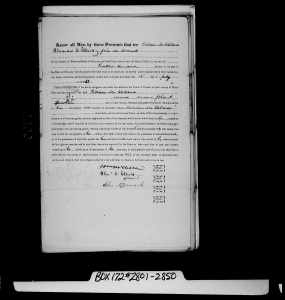 Box 44, #1279 contains the inventory written in Mr. McClelland’s scrawl on Schedule A.  See above typed transcription above for more details and easier reading.

Box 63 #2092 contains receipts of money distributed to various individuals, including Drusilla E. Spracklin for the care of the children.  A detailed accounting of expenses that covers several pages.

In the next post I will share the sale of the land of John A. Spracklin which was involved with lands that were his father’s.

Interested in travel, really into genealogy and researching my family history, classic novels and movies, fantasy and science fiction, photography, history and more... Here is a tip. Make sure you are commenting on the blog you were visiting and the post you were interested in. My blogs are listed by hovering over my pictures and clicking. Clicking one of them will take you back to the correct blog. You can try me here: bjmcdonell@gmail.com
View all posts by BJ MacDonald →
This entry was posted in Charles Nathaniel Spracklin, George Henry Spracklin, John Andrews Spracklin & Drucilla Wolverton Spracklin, John Andrews Spracklin & Lydia Goss, John Clement Spracklin, Knox County, Mount Vernon and tagged appraisers, Probate in Knox County Ohio, Probate Journals and Packets. Bookmark the permalink.