This blog’s title uses my 4th great grandfather, Solomon Goss because he was a pivotal ancestor.  He migrated to Ohio and settled in the Marietta area near the Ohio River.

Solomon’s youngest daughter Lydia married an Englishman by the name of John A. Spracklin.  John emigrated to the United States in 1817 from Somerset, England, with his aunt and uncle Wine and Anne Rood, and settled in Washington Co., Ohio.  John and Lydia married in 1819 and then migrated to Knox Co., Ohio and settled on land that Solomon Goss had purchased in Knox Co. All these events have been posted on this blog.

John and Lydia’s son Daniel married Elizabeth Keller and they migrated to Iowa. Elizabeth’s parents were John Keller and Mary Anne Delano.  So all the families of my line converged in Ohio and that is why I have featured them on this blog.

If you take a look at the top of this blog you will see pages for some of the families featured on this blog so far. These pages are like a table of contents for the posts I have written about each family line along with the publication dates.   This should make it easier for you to find and review them by using the Archive or Search box on the right side of this blog.

The origins of Peter and Elizabeth (Betty/Polly) are English.  They came from Somersetshire, England in 1823 and settled first in Knox Co., Ohio and then moved northwest to Hardin Co., Ohio, remaining there for the rest of their lives.

I would like to take this time to point out that many other Spracklin researchers have gone before me and pointed the way about the English origins of the Spracklins.  I have followed up with my own digging for the records in England by using Ancestry and Find My Past.  I have used the online FamilySearch website and also visited the Family History Library in 2013 and 2014 and used their films to find the vital records of this family.  As always double check what I present and be advised I am happy to make updates or add additional information.

Peter Spracklin would be known as the progenitor of our line of Spracklin/len in the United States.

The surname of Spracklin has been spelled many ways in records and it can be difficult to find information about an ancestor with this surname.  When you research Spracklin/len you have to use all manner of spelling to track down information.  I have seen it spelled: Spracklin, Spracklen, Spranklin, Spraklin, Sprackling, Sparkling, Spratling, Sparkely, Sparacklin, Spraclin, Spracklan, Sprecklin, Spricklin, Sprocklin, Spracklyn, Spracklyng, Sparchlen and more as indicated in the article below.

Origins of the surname Spracklin/len

This most unusual name is of Old Norse origin, dating from the 8th and 9th Century invasions and subsequent settlement of eastern and northern England by Scandinavian peoples. Sprackling derives from an Old Norse nickname or byname, “Sprakaleggr”, adopted into Olde English as “Spracaling”, and translated literally as “creaking legs”; the nickname was presumably originally given to someone who suffered from rheumatism or arthritis, or some other affliction that caused his joints to creak. A great many early surnames were created from the habitual use of nicknames, often given in the first instance with reference to a person’s physical attributes or peculiarities, as here; similar nicknames surviving as modern surnames…The nickname is recorded as “Sprachelingus” in 1130, and “Sprakeling” in 1204, and is first recorded as a surname in the mid 12th Century, as below. Early recordings include Gervase Sprakeling, in the 1204 Pipe Rolls of Wiltshire, and Robert Esprakelin, circa 1270, in the Book of Fees, Cornwall. The Coat of Arms granted to a Sprackling family of Kent depicts, on a black shield, a saltire ermine between four leopards’ faces, gold. The Crest is a wolf’s head erased, black, tufted, armed, and ducally gorged gold. The first recorded spelling of the family name is shown to be that of Unspac Spracheling, which was dated 1166, in the “Pipe Rolls of Norfolk”, during the reign of King Henry 11, known as “The Builder of Churches”, 1154 – 1189. Surnames became necessary when governments introduced personal taxation. In England this was known as Poll Tax. Throughout the centuries, surnames in every country have continued to “develop” often leading to astonishing variants of the original spelling. Taken  from The Internet Surname Database at  http://www.surnamedb.com/Surname/Spracklin

The following quote comes from the ABC Chronicles by Helen Cox Tregillis (more on this source in future posts). Chapter III Spracklins.

Apparently the name Spracklin had other forms: Spartling, Spracklen. In English or Welsh it meant “the one with the crooked legs.” As far as known to the writer, some early Spracklins on English Records were of the Canterbury Catholic Church, Canterbury, County Kent, England.  The church records there show a Robert, baptized 1645, son of Spratling; Adam, baptized 1653, son of Robert Spratling. Heralic arms were granted in 1619 to Leonardus Sprackling, Rob’tus Sprackling, and Adam Sprackling, of Thanet, Co., Kent. Possibly this Robert Spracklin was an early ancestor of Peter Spracklin who came to America in 1823.

Robert Sprakeling’s tombstone is featured at Find A Grave.

Coat of Arms of the Spracklins:

There are lots of Spracklins in the Kent County area of England going back into time. I have not studied Kent County, England at this time. Kent County is southeast of London on the eastern side of England. Somerset and Dorset are to the west in the southern part of England.

I do not guarantee the information given in this tree is correct, but it is interesting and could be a start if you are interested in these older Spracklings. Try this link for more information: http://www.wikitree.com/wiki/Sprackling-17.

Map of England from Wikipedia

Peter Spracklin was born on 20 December, 1774 in Long Sutton, Somerset, England (daughter Anne’s Prayer Book). He was baptized on 23 January, 1775 in Rampisham, Dorset, England.  Note:  Several sources are given below.

To open click on the map and then you can look at it more closely. Pitney and Long Sutton are on the right a little high up on the map. Don’t forget to hit your back button to return to this post.

Peter’s father was Robert Sprackling baptized 31 August, 1748 in Cattistock, Dorset, England. He probably died 6 February, 1820 in Evershot, Dorset, England however others use a different record of an earlier death.

1748 Aug 31, Robert son of Simon Sprackling & Anne his wife
another page of the register.

This death of 1820 is very interesting, Peter and Betty Spracklin left for the US in 1823 and I have always wondered why Peter waited.  John, the son came over in 1817 which is six years earlier.  Of course, if a will or estate could be found that might determine if the 1820 death is correct?

Peter’s mother was Sarah Langfield baptized 24 June, 1748 in Castleford, All Saints, West Yorkshire and who died 25 March, 1777 in Rampisham, Dorset, England. The marriage of Robert and Sarah took place on 5 May, 1773 in Long Sutton, Somerset, England. 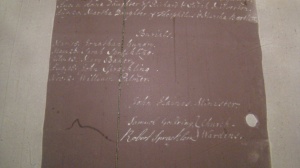 The towns of Wraxall, Cattistock and Rampisham are between Beamenster and Cerne Abbas in the middle western part of Dorset.  They are all about 2.5 miles apart. Dorset is south of Somerset.

Simon’s father was also a Simon Sprackling and he married Mary. This Simon was baptized 22 May, 1687, St. Mary’s Church, Wraxall, Dorset, England. He died 2 December, 1756 St. Peter & St. Paul, Cattistock, Dorset, England. Mary was born about 1683 and died in Cattistock.

Simon and Mary Sprackling had the following children:

Please be advised that not every vital record has a record attached.  I did most of this searching at Ancestry.com, Find My Past and FamilySearch. Some have the actual records, some have only indexes.  I did make copies of the parish records as best I could and they are not easy to read.  In some instances I did go online to parish records in England but more in a poking around manner.  I do not belong to any websites at this time.  That will probably change in time.

Trying to read actual parish registers is very difficult depending on the quality of the film. Some examples of the handwriting are good, while others are messy and in some sort of code with blotches and scribbles.

There are several areas to target in finding a parish register: online parish indexes, the films at Family History Library for a parish, Bishop’s transcripts, published works like Phillimore and more. I am learning about how to do English Research and took the British Institute Course on pre-1850 English Records in 2013 in Salt Lake City.  It was very good.

There are also many trees about the Spracklins at Ancestry and other sites and I have taken a look at them to see what they suggested.  You can study them as well.  Over the years, I have collected information from cousins like emails, family trees, and actual research request letters to English locations. Once again please double check this information and feel free to leave a comment.

In the next post I will discuss Elizabeth Andrews Spracklin’s origins in England.