Peter and Betty Spracklin’s Children: Ann Spracklin and Silvanus Cook and their family

Ann Spracklin was born on the 14th of June, 1805 in Pitney, Somerset, England. Her baptism took place in 1808 on February 17th. She shared that day with her younger brother Peter.

Ann came with her parents in 1823 to New York from England. She is listed on the ships passenger list along with her other siblings.

Anna is responsible for what is called “Anne’s Prayer book” where the births and other vitals are listed: 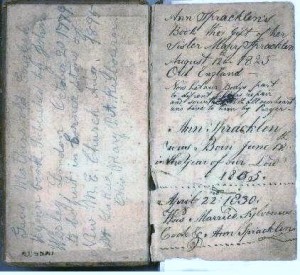 Silvanus Cook, farmer, was born April 14, 1807 in Washington Co., Penn. and emigrated to Ohio at the age of seven years, residing at first in Lexington, Richland Co., and finally in January 1843, came to this county, where he has since remained. He is a farmer by occupation, and owns thirty-eight acres of land in Section 12, Dudley Twp. April 22, 1830, he was united in marriage to Ann Spracklin, native of England, born June 14, 1805 of English descent, who emigrated to this State at the age of eighteen years. This union has resulted in five children, viz. Nelson W., married: John L, married; Peter S. (deceased); George J. (deceased), and Parmelia Ann, the wife of Byron B. Kilbourne. For nine years Mr. Cook served as Constable, for two years was Supervisor, and for six years a School Director. In politics he is a Republican, has been an active man in his day, and is one of the robust pioneers who made themselves prominent in the early history of this country.” http://www.heritagepursuit.com/Hardin/HarDudley.htm.  Heritage Pursuit is a paid site at: http://www.heritagepursuit.com/  They have the history books for counties in Ohio.

In 1847 she was also on the partition deed with John Spracklin and others regarding the partitioning of Peter’s land in Hardin Co., Ohio. See Peter Spracklin’s estate posts on this blog.

Sylvanus and Ann appear in the 1850 Census living in Dudley Twp. in Hardin Co., Ohio.

We moved ahead to 1860 and they are still in Dudley Twp. Silvanus is living right next door to Alfred Spracklin.  There are two pages to this census.

In 1870 they are residing in Dudley Twp. They are aging but doing well enough to have a servant.

Below them is Mary Kilburn, who would be their daughter.

In 1880 they are on their own and both are getting up in years.

Silvanus and Anna Spracklin Cook had the following children. 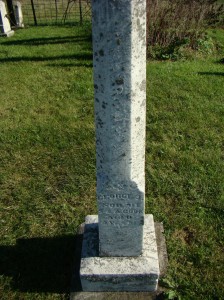 5. Mary P.A. Cook was born about 1847 in Ohio. She married a Byron S. Kibourne or Kilburne/Kilborne.

Mary and Byron are in the 1870 they are next to her parents in Dudley Twp. In 1880 they moved to La Rue, Marion Co., Ohio. They continued to live in Marion County from 1900, 1910, and 1920, then they disappear. There is a Mary Kilbourne in Huron Co., Ohio in 1930, age of 83, widowed living as a lodger with a Charles and Etta Robinson. Mary and Byron apparently had no children. Byron worked as a painter in one census. It looks like Byron died on the 23rd of November, 1925.  I am assuming if that is Mary living in Huron that she died there after 1930, this would have to be verified. 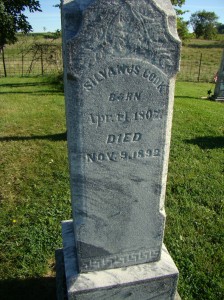 An article appeared in the Marion Star Newspaper on Fri, July 15, 1892, page 4. Sylvanus had an accident outside of town.

LaRue News: As Ezra Anderson and C.S. Lippincott were driving along the river road Monday they came upon the body of a man lying unconscious by the roadside near the Wasson farm, about a mile and a half from town. Investigation showed that it was old Mr. Sylvanus Cook and he had evidently struck his foot against the stone culvert and fallen. His face was badly cut and bruised by coming in contract with the stones, and one hand was hurt. Dr. Sawyer was driving along the road toward town and the gentlemen lifted him into the Doctor’s carriage and he was conveyed to his son-in-law’s residence here. The old man protested vigorously against being brought back to town, saying that he was on his way to the residence of his grandson, Willis Cook, at Hepburn and he wished to be taken there but the doctor thought it better for him to return to town as his face was bleeding profusely. He was not seriously injured.

Ann’s information is on the other side of the tombstone above.  It is much harder to read and I can’t get a good picture of the stone.

I have tried to find a probate/estate file for Silvanus Cook in 1892 Hardin Co., Ohio but I have not been successful in the online documents at FamilySearch. I also tried to find obituaries for both Ann and Silvanus Cook with online sources but no luck. I am not totally satisfied with what I have found so far on Ann and Silvanus.  More research into deeds and court documents might be a good place to start and trying to find Silvanus’ parents might be very interesting as well.

In the next post I will share what I know about Nelson Cook, their son, and his family.

Interested in travel, really into genealogy and researching my family history, classic novels and movies, fantasy and science fiction, photography, history and more... Here is a tip. Make sure you are commenting on the blog you were visiting and the post you were interested in. My blogs are listed by hovering over my pictures and clicking. Clicking one of them will take you back to the correct blog. You can try me here: bjmcdonell@gmail.com
View all posts by BJ MacDonald →
This entry was posted in Alfred Spracklin and Abigail Cooper, Ann Spracklin and Silvanus Cook, Cook surname, Dildine surname, Dudley Township, Hardin County, Kilbourne surname, Knox County, Lee Cemetery, Mary P A Cook and Byron Kilbourne, Nelson W. Cook and Suzanne Dildine, Peter and Elizabeth (Betty) Spracklin, Peter S and George J Cook, Pitney, Somerset or Somersetshire, Wayne Township. Bookmark the permalink.

2 Responses to Peter and Betty Spracklin’s Children: Ann Spracklin and Silvanus Cook and their family