I have spent a great deal of time trying to find the records of Huntington Township’s involvement in the Battle of Wyoming under Capt. John Franklin and the militia that he commanded.  Apparently the lists for the period 1778 were lost and I am sure that Mr. Oscar J. Harvey or Ernest Smith would have found them and published them if they could have. They were very diligent in the research for The History 0f Wilkes-Barre. 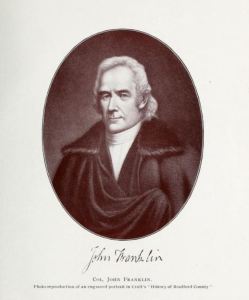 On page 10 of the booklet the 24th Regiment is described and on page 11 they describe individual the companies: Wilkes-Barre, Kingston, Plymouth, Pittston, Hanover, Upper Wilkes-Barre, Exeter, Lackaway, and Up the River.  These are just lists of the officers of these units.

On page 17 it reads: “Before closing the regimental history for 1776 I wish to mention the advent of the tenth company into its ranks, representing the train bands of the Districts of Huntington and Salem, of which Frethias Wall was elected Lt. and John Franklin, Jr. Ensign at the October session of the legislature. I have not seen this company assigned its proper place in the regiment in any of the histories. Of this company John Franklin, Jr. was ultimately to become the Capt. and Stoddart Bowen the Lt.  NOTE:  I find this to be very interesting as a comment, he states John Franklin Jr. and not sure what it means. John Franklin only had 3 children Billa, Amos and Keziah. So this must mean his father was also named John?

On page 18 is reads: Scouting parties were conducted in the Spring of 1777 and Captain Asaph Whittlesey of the Plymouth Company, led a scouting party up as far as Standing Stone.

On page 23 it reads: Denison sent a messenger express to Captain Franklin in Huntington, who dispatched Lt. Stoddart Bowen with the first of his men who could be gotten together.

The best part of this booklet is after page 32 where the pull out is located in Appendix A. There is a Roster of the Officers of the Twenty-Fourth Regiment Connecticut Militia From Date of Its Organization to day of its Destruction. Date of Commission Follows each name:

You will see that Nathaniel Goss is listed under Huntington – The 10th (or Huntington and Salem) Company was officered by John Franklin, Captain; Stoddard Bowen, Lieutenant; Nathaniel Goss, Ensign. This is also listed on Page 998 The History of Wilkes-Barre, Vol. II.  Unfortunately, this information does not give the details of the privates that were part of these units?

At the David Library of the American Revolution, located north of Philadelphia, I found a book published that covers the diaries of Lieut. Obadiah Gore, Jr.

The Revolutionary Diary of Lieut Obadiah Gore, Jr., edited by R.W.G. Vail, New York Public Library, 1929. In read through this book hoping that I would find more clues about the militia in the Wyoming Valley.  Apparently Mr. Vail had a very hard time tracking Lieut. Gore’s military career. On page 9 he describes Gore’s beginnings and that in 1762 he and his brother Daniel went to Wyoming probably as representatives of their father. On page 10 he describes Gore’s involvement in Westmoreland and his calling to arms of 20 some men in 1776. On page 12 Mr. Vail writes that “The only remaining units in the brigade were Captain Simon Spalding’s Independent Wyoming Company and Captain John Franklin’s Wyoming Militia, of neither of which units can a muster roll be found.” Unfortunately, this comment may have been about “Hand’s Brigade” which was later than the Wyoming massacre and Mr. Vail is still somewhat vague. The comment also tells us that he tried to find information and failed.

Mr. Oscar J. Harvey in his book, The History of Wilkes-Barre, writes about the series of articles by John Franklin in 1828 and what his status was on July 3, 1778:

“In a series of articles written in 1828 by Col. (formerly Capt.) John Franklin, relative to the battle of July 3, 1778, the author (Franklin) stated:

“July 2d 1778 at nine o’clock in the evening, I was in Huntington (Township), a mile from my home, at a neighbor’s when I received by express the following letter:

To Capt. John Franklin, sir, you are commanded to appear forthwith, with your company, at the Forty fort in Kingston. Don’t let your women and children detain you, for I don’t think there is any danger at present, for the enemy have got possession of Wintermoot’s fort, and I conclude they mean to attack us next. You will act as you think prudent about ordering the women and children to move to Salem; but you must not wait one moment to assist them. (Signed) Nathan Denison, Colonel. To Capt. Whittielsey – You are desired to forward the above with all possible expedition. Don’t let anything detain this; press a horse if needed. Signed Nathan Denison, Colonel.

My company, continued Franklin, living scattering — a part in Huntington and the remainder along the river from Shickshinny to near Berwick; the greatest number, however, lived in Salem. The letter was copied (by me) and sent to my Lieutenant, Stoddard Bowen, at Salem, with directions to have him meet me at Shickshinny early the next morning, with all of the company that could be collected in that quarter. Notice was also given to every family in Huntington. Two of the company from Huntington were at that time in Shawnee (Plymouth) and three at Shickshinny. Source: page 994, The History of Wilkes-Barre, Vol. II. These articles were printed in Feb 1828 in the Towanda Republican (Bradford Co.) and in The Wyoming Herald Sept 5, 12, 19, 1828 (Wilkes-Barre).

Sadly Mr. Franklin does not get specific as to the names of these men. He did write this years later so he might have forgotten who they were.

Years later Capt. Franklin organized a new militia and you can find that information on Page 1145 Chapter XVIII  of The History of Wilkes-Barre which covers Capt. John Franklin’s Company of Westmoreland Militia dated 3 April to the 4th of May 1780 and it is listed on page 1229.

This was a whole new militia created in 1780 for nothing had been done since 1778 and because the ranks of the 24th had been decimated.  Apparently it is printed in the Pennsylvania Archives Second Series, XIV:335.  This militia was 2 years after the Battle of Wyoming. No Goss family are listed on these rolls.  This militia was later incorporated into the Connecticut Militia in 1781 and is described on page 1280.

As far as I can tell and much to my disappointment, there is no detailed listing of the militia rolls covering all members from 1778. You can read more by going to The History of Wilkes-Barre Vol. II and III and study those pages for clues.

NOTE:  It took a little effort to find the reference to the Pennsylvania Archives in the paragraph above, it is Pennsylvania Archives Second Series XIV:335 which is Volume 14, Part 5 Muster Rolls and Papers of the Militia of Northumberland County. Ancestry.com has this PA Archives Series online at their website for browsing, which means that you either have a subscriptions or use your library card at the library to access. It covers pages 335 to 336. It also lists Privates but no Goss are there. 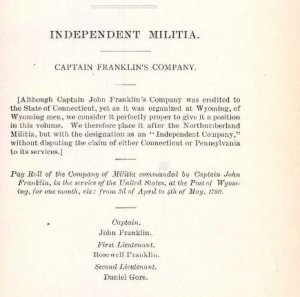 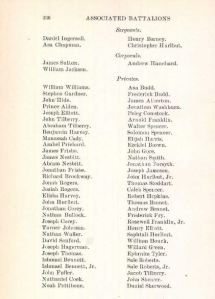 In summary, it appears that the records for the militia, in detail, for the various companies of the Wyoming Valley in 1778 are lost, except for the officers. Remember the Revolution was not over until 1783 so technically any person listed on these militia rolls did fight for the new United States.

Interested in travel, really into genealogy and researching my family history, classic novels and movies, fantasy and science fiction, photography, history and more... Here is a tip. Make sure you are commenting on the blog you were visiting and the post you were interested in. My blogs are listed by hovering over my pictures and clicking. Clicking one of them will take you back to the correct blog. You can try me here: bjmcdonell@gmail.com
View all posts by BJ MacDonald →
This entry was posted in AMERICAN REVOLUTION & Other Conflicts, Huntington Twp., Nathaniel Goss and his wife Hannah Scott, Wyoming Valley and tagged 1778 to 1781, Captain John Franklin, Connecticut Militia in Wyoming Valley, Nathaniel Goss Ensign for Huntington. Bookmark the permalink.