First of all, I am sure that my Seward/Seaward cousins know a lot more about the children of Enos and Sarah (Goss) Seward then I do; however, I will share what I do know. The important thing is to preserve our heritage as soon as possible.

This is a very interesting couple and throws considerable light on the Seward Family history. No record has been found covering the son ENOCH or at least the vital records of Granville have omitted his name. Perhaps through some error it was not entered. These older New England Families were much given to “pet” or “nicknames,” so it becomes easy to explain “Sally,” who of course was daughter “Sarah.” “Molly” is also easily accounted for, since the name given in the Granville Vital Records is Marah. The use of the name commands more than ordinary attention because it confirms again the use of the dual name of her grandmother Mary or Marah Kendall as shown in entries for vital records at Granville and Becket, Massachusetts In the Seward Family the name Mary was “Molly.” The oldest child of Ebenezer GOSS was Mary GOSS but called by the family “Polly.” The grave marker at Scott’s Cemetery below Huntington Mills reads “Mary GOSS, mother of Nathaniel GOSS.” (Mary or Marah (Kendall) GOSS) It should also be noted that Nathaniel GOSS, Sr. had a daughter Mary GOSS. She married Elnathan Jennings and was called “Polly” Jennings, and was among members of the GOSS Family who also went with their families to Randolph, Portage County, Ohio, so that it is now quite easy to see “Marah,” “Molly” and “Polly” are all the same name for the correct use of the name Mary.

“The Sewards were also noted for their large noses, and a story is told of one of the Sewards, Gad or Enos who became a bit peeved when a neighbor with an equally large nose said as he met the said Seward: “Mr. Seward, will you please turn your nose to one side, I want to get by,” or words to that effect.” From the Paul H. Goss manuscript.

Here is an overview of the children of Enos Seward and Sarah Goss. I will go into more detail on each of these individuals in future posts .  Please be advised that I have researched these children but would clarify that not all is proven. I am willing to make updates but please be kind with your comments and supply me with proof.

During the compiler’s visit in the home of Mr. and Mrs. Willard Gearhart, descendants of the Nathaniel GOSS Family residing near Fairmount Springs, Luzerne County, Pennsylvania were telling of a little “jingle” passed along in their family about the Seward Family cousins:

“ENOS, ENOCH, ELI,
AMOS, CAD, LEVI,
SALLY, TITUS, MOLLY, NEZER.”  From: Paul H. Goss Manuscript, Note: apparently there are different takes on this jingle by others.  More on this jingle in a future post.

Here is an interesting descendancy chart for Enos and Sarah (Goss) Seward. 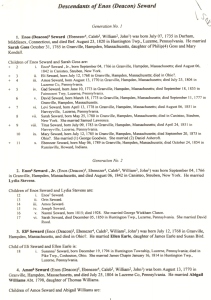 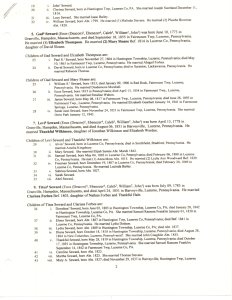 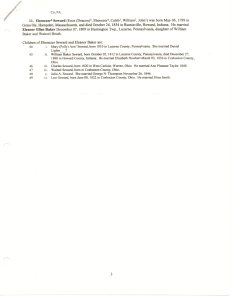 The above 3 pages were found in the Granville Public Library, History Room in Granville, MA on my trip and trips there. They were in the Seward/Seaward File in the filing cabinet. Unfortunately, I don’t know who compiled it. It was not signed. This room is their History Room and you need to make an appointment before going. I will share more of what I found in the file in future posts. As usual, everyone has a different take on the research of the family.  I like these types of documents because they give me guidelines.

The children of Enos Seaward/Seward and Sarah Goss, an overview:

Apparently another son was born to the Seward Family after their removal to Huntington Township, Pennsylvania named Ebenezer, which would easily account for the ending of the couplet, “Nezer.” He was undoubtedly the youngest child, and so named Ebenezer for his Uncle Ebenezer GOSS our ancestor who was the youngest child of Philip GOSS, Sr. (4th) and Mary or Marah (Kendall) GOSS.  Paul H. Goss – Goss Family Manuscript.

Note: This quote does not make sense for my research shows that Enos and Sarah Seward did not migrate to Huntington Twp. till 1793.

Each of these children will be featured in future posts, with sources and additional information.

Source of the Excerpts in quotes:

Go to my page about Paul’s Manuscripts: sgossfamily.wordpress.com/paul-h-goss-and-the-goss-family-history/

Paul had various versions over the years of his Goss Manuscript so the wording might not be exact.  I am working off a copy I found in the Mayflower Library in Plymouth years ago when I visited that area.

There are others who have written about the history of Huntington Twp. and the people who lived there. I will share those stories in future posts.