Clarissa Seward was apparently born 5 January 1790 which means she might have been born in Waterbury, New Haven, Connecticut or even Massachusetts, because an Amos Seward appears in the 1790 U.S. Federal Census as living in Waterbury. It was enumerated in July 1790.

Clarissa married Joseph Swetland about 1814. Joseph Swetland was born 22 May 1767 in Kent, Litchfield Co., Connecticut. He was buried on 22 June 1820 in Mehoopany, Wyoming, Pennsylvania which is north of Wilkes-Barre. Joseph was 47 years old when he married Clarissa. She was about 24 years old.

There is the Swetland Family Association online at:  http://www.swetland.org/Subfolders/Misc/book.html

There is also the Swetland Homestead in Wyoming, PA and I suggest you pay attention to the hours if you wish to visit. I did visit in 2008 and it was very lovely and worth it. It is not too far from the Wyoming Monument:  http://luzernehistory.org/museums-historical-sites/swetland-homestead 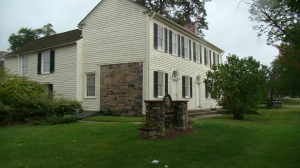 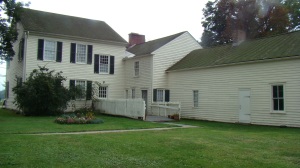 Swetland Homestead in the back area

Joseph was married before to a Salome Hall (1767-1811) in Kent, Connecticut 27 September 1786, and they had around 9 children together before she died 1 December 1811 in Wilkes-Barre. The organization was the First Presbyterian Church but it does not state the burial location.

Joseph Swetland appears a great deal in the book titled: The Michael Shoemaker, by Wm. T. Shoemaker Blair in 1924. The family appears on page 23. Be careful with this book, I found it difficult to read. You can find this book at Ancestry.com but also at Internet Archive for viewing.     https://archive.org/details/michaelshoemaker00blai/page/22

In the 1800 U.S. Federal Census he is now living in Kingston, Luzerne, Pennsylvania.

Joseph Swetland was apparently one of many militant settlers that decided to send another petition to the federal government. There were 1150 Susquehanna settlers that signed this petition. The source is #32 in Donna’s Settler Book: “Petition of the Inhabitants of Pennsylvania Who Settled on Lands Claimed Under Grants from the State of Connecticut,” RG233 7A-F4.2 5 January 1802 NARA; Papers 11: 230-245 No. 108 as “Petition to Congress from Connecticut Claimants,” Nov, 1801. Unfortunately I do not have a copy of this petition and apparently it was not easy to obtain.

The Micheal Shoemaker book on page 22 and 23 describes Joseph’s land dealings in Luzerne Co., which are very complicated and this explanation could be helpful in finding deeds for this man. Apparently Clarrisy is involved in a deed sale in 1817-1818 with her husband.

In the 1810 U.S. Federal Census, Joseph is living in Kingston, Luzerne, PA.

Joseph Swetland has now moved to Windham, Luzerne, Pennyslvania and he has 13 total living with him. It is now before August 7, 1820.  Update: Not sure who this is?

Joseph Swetland left a will and I must admit it is most interestingly written:

In the name of God, amen, I Joseph Swetland of Windham Township in the County of Luzerne, State of Pennsylvania farmer, being week in body but of sound mind, memory and understanding blessed be God for the same, but considering the uncertainty of this transistory life, do make and publish this my last will and testmanent, in manner and form following to wit: principally and first of all, I commend my immortal soul into the hands of God who gave it an my body to the earth to be buried in a decent and Christian like manner at the discretion of my executors herein after named and as to such worldly estate wherewith it hath pleased God to bless me in this life. Afterall the funeral Expenses and legal debts – paid, I give and dispose the remainder in the following manner, to wit.

I give to my son Artemis fifty acres of land on the south-west side of the backend of the lot which was conveyed to me by Ebenezer Gay and surveyed for Artemis by William Whitefele and fifty acres adjoining Artemis on the northeast side and surveyed by said Whitefele. I give to my Gordon, and as touching all the rest residue and remainder of my real and personal  property I give and devise the one-third to my beloved wife Clarissa so long as she shall remain my widow, the other two-thirds shall remain in the charge of my executors until my youngest child Sinthia arrives to the age of twelve years, the incomes of the same shall go to the support of the widow Hall and my son Revillow and the support and education of my children the use of said estate shall devole on my son Gordon until Sintha shall arrive to the age of twelve years providing he shall give that necessary support and schooling before mentioned which shall be  at the discretion of my Executors that the support &c, shall be properly done. If Revellow shall be living at the time Snitha arrives at the age of twelve years, then for the support of him I allow the use after fifths of the aforesaid two-thirds for the support of Revellow  through his life which use of the same shall devole still in the hands of Gardner or his heirs while they shall support Revillow, at the decease of Revillow the right and property of sd Estate of two fifths shall be equally divided between my children Artemas, Gordon, Butler, Miner, John, Julia Ann, Sally Ann and Sinthia, the residue of three fifths yet undivided at the time of Sinthia shall arrive to the age of twelve years, I give to my daughter July Ann two hundred dollars to my daughter Sally Ann one hundred dollars, to my daughter Sinthia one hundred dollars and to my son Daniel twenty dollars, to my daughter Polly twenty dollars, to my daughter Hannah twenty dollars, the residue of the said three fifiths as well as the part heretofore set off to my wife shall be divided between my sons Gordon, Butler, Miner and John, and to the so proportioned that Gordon, Butler and Miner shall each have a double share to that of John. And the said one third which is left to my wife shall be divided among the last above mentioned as soon as she cease to be my widow.  An lastly I nominate constitute and appoint David Perkins of Kingston and John L. Butler of Wilkesbarre to be the executors of this my will hereby revoking all other wills legacies and bequests by me heretofore made and disclaiming this and no other to be my last will and testament. In witness, whereof I hereunto set, my hand and seal this ______ Anno Domini 1820.

Signed Sealed published pronounced and declared by the said testator as his last will and testament in the presence of us who in his presence and at his request have subscribed as witnesses. William Seaward.

At Registers Court held at Wilkesbarre the county of Luzerne on Friday the 23rd day of February Anno Domini 1821, before the Hon. David Scott Esq. President and Jesse Fell Esq. one of the associate Judges of the Court of Common Pleas for said county and Chester Butler Register for the Probate of wills etc. the said court that the proof offered in support of the will of Joseph Swetland deceased be considered sufficient to substantiate the same and order that letters Testamentary be granted to David Perkins & John L. Butler, Executors named in the said will.   By the Court, Chester Butler, Register

In conformity with the foregoing adjudication and order of the Register Court Settlers Testmentary, were granted to the said David Perkins and John L. Butler they having first been duly sworn truly to Administer the goods, chattels, rights and credits of the said deceased and make a true and perfect inventory, hereof and exhibit the same into the Registers officer on or before the twenty third day of march next and to render a true account, calculation and recording of their whole administration on or before the twenty third day of February 1822 or when thereunto legally required. Chester Butler, Register.  (___Minutes of Registers in Registers Court Records pages  17, 1819.

Based on the Will above Joseph Swetland had the following children between his two wives: Daniel, Mary (Polly), Hannah, Artemis, Gordon, Revillow, Julie Ann, Lord Butler, Charles Minor. I believe these children he had with Clarissa: Sally Ann, John, Harriet and Cynthia.

Clarrissa’s final fate is unknown at this time but I wonder if she isn’t buried in the Grist Flats cemetery; however, when I searched nothing came up in Find A Grave.

John Seaward born about 1795 and probably in Luzerne Co. There does not seem to be any further information about John.

Lucinda Seaward was born about 1798 in Huntington Twp., Luzerne Co., PA. She married to Isaac Bailey about 1823. Her nickname seems to be “Lucy.”

In 1860 U.S. Census Lucy Bailey appears age 62 working as a domestic with 1100/1000 born in Penna. She is living with a Mary Waggoneer age 33 with $300, a Freeman age 3 and a Lucinda C. age 0 or 3. This Mary is her daughter and the 2 children are grandchild. Mary married twice first to Adam Waggoner and then to a Ross Sarver.

Isaac and Lucinda (Seward) Bailey may have had the following children: Hannah born 1813 no information; Lucinda Bailey born 1819 and died after 1880. She is said to have married Freeman Seward a son of Levi and Thankful Wilkinson. I don’t have a marriage to prove this however; Mary Bailey born 15 Jan 1828 and died 23 Apr 1911. I have described her a little in the 1860 U.S. Census above.

At this time, I do not know where Lucinda and Isaac Bailey are buried.

By 1840 a William Thomas Seward appears in the 1840 U.S. Federal Census living in Dixon, Lee, Illinois. 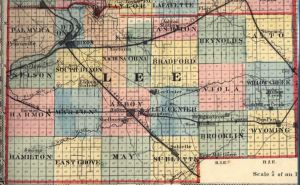 According to North American Family Histories the Wynkoop Genealogy, Julia died 23 September, 1855 in Bellevue, Iowa? I do not know where she is buried. William T. Seward died sometime before the 1850 U.S. Census and his burial is also unknown but mostly likely in Lee Co., Illinois.

Once again, please be advised that this is an overview of the children of Amos Seward and Abigail Williams. A lot more research needs to be done to get a better understanding of these families. As always genealogy is evolving and so I am open to all information.

Interested in travel, really into genealogy and researching my family history, classic novels and movies, fantasy and science fiction, photography, history and more... Here is a tip. Make sure you are commenting on the blog you were visiting and the post you were interested in. My blogs are listed by hovering over my pictures and clicking. Clicking one of them will take you back to the correct blog. You can try me here: bjmcdonell@gmail.com
View all posts by BJ MacDonald →
This entry was posted in Amos Seward and Abigail Williams, Bowman surname, Fairmount Twp., Grist Flats Family Cemetery, Huntington Twp., Illinois, Litchfield County, Luzerne County, New York, Pennsylvania, Swetland - Luke Swetland Family, Wynkoop - Wynkoop Family and tagged Illinois Genealogy, Pennsylvania to Illinois, Swetland Association, Swetland Family, The Michael Shoemaker Book. Bookmark the permalink.