Philip Goss was born 12 August 1746 in Brookfield, and for some reason his birth was also recorded in the Simsbury, Connecticut records after his father Philip Goss IV (1724 to 1779) took the family and migrated there.

Another source is The Descendants of John Stockbridge featured in the New England Historical and Genealogical Register Vol. 134, pg. 231 published in 1980. You can find an index at Ancestry or go to American Ancestors website and search the Register. It is fee based but you might be able to find a genealogical society that has access for members. The source reads:

As far as I can determine Philip Goss Jr. born in 1746 did not come to the Wyoming valley with his father Philip and brother Nathaniel till a bit later, or the records just do not show him as present. They arrived 1769 and he would be 23 years old at the time, so he could have been there or he stayed back in Massachusetts or Connecticut.

In the History of Wilkes-Barre, in the footnote on this page 999, even Oscar J. Harvey, the writer of this series of histories of the area, questions whether it was the son or the father, and decided it was the father:

“Nathaniel Goss was the son of Philip Goss, Sr. of Becket, Berkshire County, Massachusetts, and as early as the Summer of 1769 Nathaniel Goss and either his father or his brother Philip (it was, undoubtedly, the father) were in Wyoming Valley, (See lists on pages 497 and 509.) Philip Goss, Sr., was the father of the following-named children: Solomon, Comfort, David, Nathaniel, Sarah (who became the wife of Enos Seward, Jr., of Granville, Massachusetts) and Philip (who was born in 1746; was married to Hannah ——, who died March 15, 1834, aged eighty years; he died in Huntington Township, Luzerne County, October 25, 1833).”

Philip Goss Jr. appears in the Proceedings and Collections of the Wyoming Historical & Geological Society Magazine (now called the Luzerne County Historical Society).  He is listed in the list of Taxable Inhabitants in the Town and Co. of Westmoreland, CT 1776-1780.

Remember that Westmoreland was a township and county government formed by Connecticut and it was located in the Wyoming Valley of Pennsylvania. It is along the Susquehanna River in the Wilkes-Barre area where the Susquehannah Company claimed lands from 1752 to its end in about 1802.

Philip Goss Jr. appears in the tax lists for the Plymouth District starting in 1776.

1780 – Does not show any Goss or associated family members but then there are only 91 names listed which means a lot of individuals were not accounted for. It is my understanding that it took awhile for the settlers to return after the Wyoming Massacre in 1778. They still had to secure the area and stop the Indians and Tories from causing trouble.

The above information is reflected in the following as listed in Donna’s book Vol. II for the Settlers. She gives sources.

Plymouth District back in 1775 and 1776 included Huntington Twp. as stated in the History of Wilkes-Barre by Oscar J. Harvey Vol. I, II page 999:

In 1775 the township of Huntington was laid out under the auspices of The Susquehanna Company (see map facing page 468); and its location was within the bounds of what, by vote of the inhabitants of Westmoreland, was entitled “Plymouth District.” (See page 794). During 1775 and 1776 there were very few inhabitants in Huntington, but some time during the latter year the number as increased by the removal thither of Philip Goss, Sr., and his family, who settled near what is now known as Huntington Mills. The name of Philip Goss, Sr., Philip Goss, Jr., Nathaniel Goss and Solomon Goss appear in the tax-lists of Plymouth District (which included Huntington and Salem) for the years 1776, 1777 and 1778.

I have not been able to find any evidence that Philip Goss Jr. served in a military capacity. However, it is possible that he was involved with the area militia, such as John Franklin’s company out of Huntington. Unfortunately, those records were lost as far as I know and believe me I have tried to find them. We do find evidence of Nathaniel Goss and Solomon Goss which I will share further in future posts.

In 1777 to 1778 there were meetings held in Huntington Twp. and here we see that Philip Gofs Junior was involved in mill planning. You will need to scroll almost to the bottom were the ink blob is to find his name.

Voted that John Franklin Junr, Solomon Squire & Philip Gofs Junior be a committee to lay out said 150 acres above mentioned for the encouragement of building a mill & mill plan and likewise employ some able person to build Said Grist Mill the undertaken to be Obliged to have a good Grist mill well erected and running within one year from the date and to maintain the said mill in good order with good attendance 15 years from the time it first runs. 890 Huntington– At a meeting of the Proprietors of the Township of Huntington in the County of Westmoreland legally warned held at the dwelling house of Obediah Scott’s in said Huntington on the 25th Day of December A.D. 1777.

Source: Proprietors Meeting Minutes Huntington Twp. Dec 1777 to May 1778, Unpublished papers found in the boxes of Paul H. Goss, his personal research notes, letters and other items donated after his death, New England Historic and Genealogical Society in Boston, MA in the Special Collections.  As of 2017 they appear to have been moved to storage.

Philip Goss signed a petition in 1783 trying to get the congress to get the land issues settled. This was to the Continental Congress. It was a Petition of Zebulon Butler & Others  9th Article, Wyoming Nov. 11, 1783. The list included Nathaniel Gooss, Philip Goss, Obad’h Scott.

Please note that after the Trenton Decree of 1783 declared the lands in the area belonged to Pennsylvania, the government shifted to Northumberland for a short time. This was not a good situation for the settlers and they were basically without government for several years, so they pushed for a county and eventually Luzerne County was established in 1786.

There is also a list of the 1796 Taxables in the Annals of Luzerne County on page 548 which is at Internet Archive online for viewing as follows: pg. 548 Appendix, M. List of Taxables Huntington Twps: 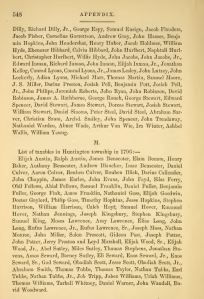 The U.S. Direct Tax Lists from the IRS files for 1798 features Philip Goss in Huntington Twp. Valuation 710, 1 and 35. His brother Nathaniel is below him and his nephew.

In 1800 Philip Goss again appears in the U.S. Federal Census. He is living in Huntington Twp., Luzerne Co., PA

Philip Goss appears in the Pennsylvania Septennial Census of 1800 along with other family members in Huntington, Luzerne Co., Pennsylvania. This is just a name list only.

In the 1810 U.S. Federal census we find Philip Goss still living in Huntington Twp. but there are only two in the family.

The 1820 U.S. Federal Census has Philip Goss in Huntington Twp. with the enumeration date of August 7, 1820.  The family has 14 members at this time. It looks like Philip and Hannah were living with their son?

Once again we find a Philip Goss living in Huntington Twp. in the 1830 U.S. Federal Census, this compiler thinks this is the son because Philip would be 84 years old born 1746. Hannah would be 77. There are no older persons of that age in this census like it was suggested above.

There is a census for a Philip Hoyt living in Huntington Twp. in 1830 of the proper ages per Ancestry.  This census has a Philip Jr. and a Nathaniel Goss listed above. Another Philip Goss is below with the correct ages for our couple.

In the next post(s) I will discuss Philip Goss Jr. and his buying and selling of land.

Interested in travel, really into genealogy and researching my family history, classic novels and movies, fantasy and science fiction, photography, history and more... Here is a tip. Make sure you are commenting on the blog you were visiting and the post you were interested in. My blogs are listed by hovering over my pictures and clicking. Clicking one of them will take you back to the correct blog. You can try me here: bjmcdonell@gmail.com
View all posts by BJ MacDonald →
This entry was posted in Connecticut, Darby Surname, Granville, Harveyville, Hebron, Huntington Twp., Luzerne County, Nathaniel Goss and his wife Hannah Scott, Obadiah Scott Sr. & Hannah Howe & Charity Barber Sutliff, Paul H. Goss 1890 to 1963, Philip Goss (Jr. or V) and Hannah Darby, Philip Goss IV son of Philip Goss III & Keziah Cooley - wife Mary (Kendall) Goss, Sarah Goss and Enos Seward Family, Solomon Goss and Olive (Scott) Goss (Son of Philip & Mary (Kendall) Goss, Stockbridge surname, Westmoreland Twp and later County and tagged Genealogical in Luzerne County, Huntington Twp Meetings, Tax Lists in Luzerne, Westmoreland to Luzerne County. Bookmark the permalink.