In the last post, I discussed the birth of John Goss and his possible age. I also presented some information about his marriage.  In this post I want to go through other records to show more about John Goss and his life in Pennsylvania.

John Goss begins to appear in the records of Luzerne County on 7 June 1793.

In the last post, I mentioned a Warranty Register listing for John Goss that took place in 1793. This is an index listing and to find all this information we would have to request copies from the Pennsylvania Archive in Harrisburg. There are only indexes online at this time at their website.

I find this very interesting that he was involved in 1793 this means he was born about 1775 if he was 18 years old at this time. 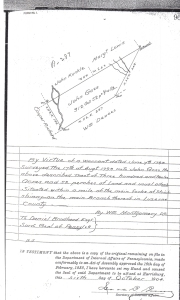 Survey dated 1793 – is this Shickshinny land?

I do not have a deed regarding this transaction, my study of deeds for John Goss don’t show this timeframe for a deed for him.  So I am a bit puzzled.  It is important to note it however.  The Survey is very interesting.  I think some more research on this is needed, Sigh!

To all people to whom these presents shall come Greeting Know ye that I Elijah Rood Jun’r of Huntington in the County of Luzerne and State of Pennsylvania for the consideration of fifty seven dollars received to my full satisfaction of John Gofs of Huntington in the County of Luzerne and State of Pennsylvania Do by these presents remise, release and forever Quit Claim unto the said John Gofs Beginning at the South east Corner of the tract of land which I bought of Abiel Fellows then N22 W 50 perches to a corner to be erected thence south Sixty eight West one hundred and Sixty four perches for a corner to be erected thence South 22 Degrees East 50 perches to a stake and stone thence N 69 E one hundred and Sixty four perches to the place of beginning Containing fifty acres be the same more or lefs To have and to hold the above granted and quite claimed premises with the appurtenances thereof the s’d John his heirs and afsigns forever to his own proper use and behoof and that I have a good right to sell the same in manner and form as is above written I the Elijah do by these presents warrant and defend that no person from by or under me shall have any right Challange or Demand thereto In witnefs whereof I have hereto set my hand and sel the 15 day of December A. D. 1796.  Witnessed by Obadiah Scott Jun’r and Lawrence Myers.  Signed by Elijah Rood Jun’r (Seal).

Luzerne County SS Be it remembered that on the fifth day of January 1797 before the Subscriber one of the Justices of the Peace in and for the said County personally appeared Elijah Rood Junior the Grantor of the within Instrument and acknowledged this same to be his free deed Witnefs my hand and seal this date aforesaid. Recorded Jany 5, 1797 (exam’d)  Seal Lawrence Myers.

This is the Claimant summary from Donna’s Book:

This above deed is followed by another in which Nathaniel Goss Sr. sells land to his son John Goss in 1797.  I love it when a father acknowledges his children in a deed.

Know all these presents that I Nathaniel Gofs of Huntington Luzerne County & Pennsylvania State for consideration of one hundred and fifty dollars received to my full satisfaction of my Son John Gofs of the s’d township County & State Do by these presents bargain sell convey confirm & quit all my Right Title Claim and Interest whatsoever to him the s’d John Gofs his heirs and assignes a certain tract or parcel of land Situate & being in the aforesaid Township & Bounded as follows viz Beginning at the Northwest Corner of the fifty acres of Lot No. _____Eli Seward which pertains to Lot No. thirty six of the Second Division of Lots in S’d township & thence west twenty degrees South fourteen Rods to the Northwest Corner of the Lot No. thirty five of the aforesaid Division thence South twenty two degrees East eighty nine rods thence East twenty two degrees South one hundred & eighty four rods or the Town line thence North twenty two degrees west one hundred & thirty one and a half Thence west twenty-two degrees and ___one hundred sixty Rods to the northeast corner of the fifty acres of land and from thence the place of beginning containing by ______ation one hundred fifty acres of land the same more or less To Have & to Hold the bargain sold conveyed & confirmed premises unto him the said John his heirs & assignes to his & their own proper use & Likewise I had legal possession of the same & had a good right  to sell & convey the said premises as above I furthermore I do by these presents warrant and forever defend the deeded Land to the s’d J. Gofs against any Title or Claim coming from or under the Susquehannah Company or Connecticut title  In witness hereof I set my hand & affix my Seal in Huntington Township this fourth day of September in the year of our Lord one thousand seven hundred & ninety seven

Signed Sealed and Delivered in the presence of Gideon Post, Jesse Scott –Nathaniel Gofs (Seal)  NB of the words – of Land – figure 2 & right ___ Inter ____before it was signed ——–

Luzerne County SS on the 8th Day of Nov. 1797 came before me one of the Justices of the Peace in and for the Said county Gideon Post on one of the subscribing withnesses and ____duly sworn according to law said that he was present at the signing and sealing of the within deed and saw the within named Nathaniel Gofs sign it as his free act and Deed and saw Jesse Scott sign it as witness and signed it himself as such.  Witness my hand this day& hour written, Nathan Beach

Luzerne County SS  – Recorded in the Office for Recording Deeds for the County aforesaid in Deed Book No. 8 page 179 etc Witness my hand and Seal of Office at Wilkes-Barre the 16th Day of July 1802, Jacob Hart Recorder. There are seals on this that obscure some of the writing.

In past posts I have published about Gad Seward and his life in the area. You can go to the table of contents at the top of this blog and scroll for posts about the Seward family: https://sgossfamily.wordpress.com/philip-goss-iv-and-his-wife-mary-kendall-1721-to-1821/

John appears in 1798 in the Pennsylvania US Direct Tax Lists for Huntington along with his father Nathaniel and uncle Philip Goss.  I have presented this in a past post but feel it is important to take a look again. This was also published in the last post. 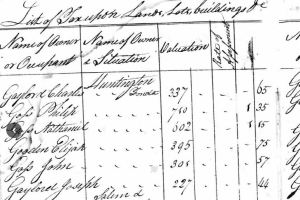 John Goss is listed along with his father Nathaniel and Uncle Philip Goss.

In 1800 John Gess (Goss) appears in the U.S. Federal Census for Huntington Twp. Luzerne Co., Pennsylvania. John is near many family members like the Sewards, his uncle Philip Goss, his father Nathaniel Goss. It looks like they have two children at this time.

In the 1800 Pennsylvania Septennial Census John’s name is listed along with many other family members in the Huntington list.  This is just a name list under the townships.

I stop here because about 1804 John Goss migrates to Portage County, Ohio. His migration to Ohio is a big step and I will post about it soon.  However, in the next posts I will share more about John Goss and his land dealings in Luzerne County and there will be some very interesting developments.

Interested in travel, really into genealogy and researching my family history, classic novels and movies, fantasy and science fiction, photography, history and more... Here is a tip. Make sure you are commenting on the blog you were visiting and the post you were interested in. My blogs are listed by hovering over my pictures and clicking. Clicking one of them will take you back to the correct blog. You can try me here: bjmcdonell@gmail.com
View all posts by BJ MacDonald →
This entry was posted in Huntington Twp., John Goss and Mary "Polly" Davidson, Luzerne County, Nathaniel Goss and his wife Hannah Scott and tagged Goss Family, Luzerne County Genealogy, Scott Family. Bookmark the permalink.