As far as I can tell, Jesse Scott was in Washington County about 1803, unless he diverted and went somewhere on his way there. Remember that Washington County was a very large county in the beginnings of Ohio and other counties were carved out of it over time.

The early years for Washington County, Ohio are made up of Tax Lists for the census because it didn’t survive. I have scrolled through the 1803 handwritten census list for Washington County, Ohio for 1803 (Northwest Territory) for Waterford and there is no listing for Jesse Scott or Obadiah Scott, Jr. It does take time for settlers to buy land and then show up on the tax records.

The earliest I can place Jesse Scott, however, is with the tax records or census substitutes for Ohio in Washington County, Ohio in 1808, and 1809 and again in 1810.**

Obadiah Scott Jr. is a page or two later in the listing. I will write about Obadiah Jr. in future posts. I am concentrating on Jesse at this time.  You can click on the map below and see the Donation Tract in Washington County, Ohio.

Jesse Scott appears in the 1813 Waterford Twp. Tax List and he is close to a Simion and George Evans

In 1814 Jesse Scott is in Waterford with this listing

Usually when someone dies, the Tax records reflect it with either the use of Estate or Heirs, as we will see when we study Obadiah Scott Jur. There is no indication of that in these records for 1816, 1817 1818 and 1819. I cannot find partition deeds for Jesse Scott’s land which is the deed that shows the land with the children/heirs selling it to another. In some situations, the land can be deeded prior to the death of the person.

In 1816 and 1817 the tax lists feature a Jesse Scott, the question is which Jesse is it. Jesse or his son Jesse?

In the 1819 Waterford Twp Tax List We have Obadiah Scott above Jesse with a Perez Stutt and Oliver Shoots after him then Jesse and now we have another piece of land.

In 1820 we find Amy Scott living in Morgan County, Ohio in the 1820 US Census, I am not sure what the total numbers mean. I only count 9 individuals, not 18. Morgan County was founded in 1817 and organized in 1819. It was made up of parts of several counties including Washington County. 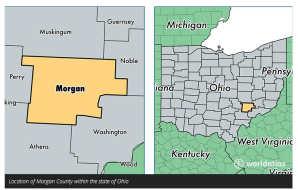 Enumeration Date August 7, 1820, there is no listing for a male of Jesse Scott’s description who would be about 57 years old at this time.

In Summary:  Jesse Scott and Amy migrated to Waterford Twp. in Washington County, Ohio and lived there from about 1803 to 1816 when he died.  During this time period there is very little information about Jesse Scott. He does not appear in the history books of the county and deeds are a bit wanting.  His estate records are also limited.

In order to understand family history in Ohio you have to understand the evolution of the counties. Here is a link to a website with Antimap on it. This mapping software shows the progression of county formation. Scroll down the page to the 1798 map and then just click on the next box and it will proceed through the years showing you how Ohio changed: http://www.mapofus.org/ohio/

It is possible that Jesse Scott’s family was living in Washington County and it later became Morgan County.  A lot of digging into the records is needed.

NOTES: More about the Tax Records of Ohio:

There are several past posts I have written about the Tax Records for Ohio for Solomon Goss deeded land in Knox County to his daughter Lydia Goss and she an her Englishman, John Spracklin migrated there about 1823 to live out their lives and pass that land down to their children.  Remember the Bounty Land Warrants that Solomon Goss obtained in 1790 and then sold in 1800 in order to get the land in the U.S. Military Lands.

Solomon Goss: The Census and Tax Records of Washington and Knox County, Ohio – A Review, September 20, 2016.

Interested in travel, really into genealogy and researching my family history, classic novels and movies, fantasy and science fiction, photography, history and more... Here is a tip. Make sure you are commenting on the blog you were visiting and the post you were interested in. My blogs are listed by hovering over my pictures and clicking. Clicking one of them will take you back to the correct blog. You can try me here: bjmcdonell@gmail.com
View all posts by BJ MacDonald →
This entry was posted in Evans surname, Jesse Scott and Amy Evans, Washington County, Waterford Twp. and tagged Tax Records for Ohio, Washington County Genealogy. Bookmark the permalink.